Placeholders are used to substitute the required values, names and logins

All conditions except the placeholders themselves are set for example

To install a placeholder, you need to enter it in the text field of triggers, anchors, commands, filters, or any message fields from the bot.

As an example, we will look at setting up placeholders in a trigger: 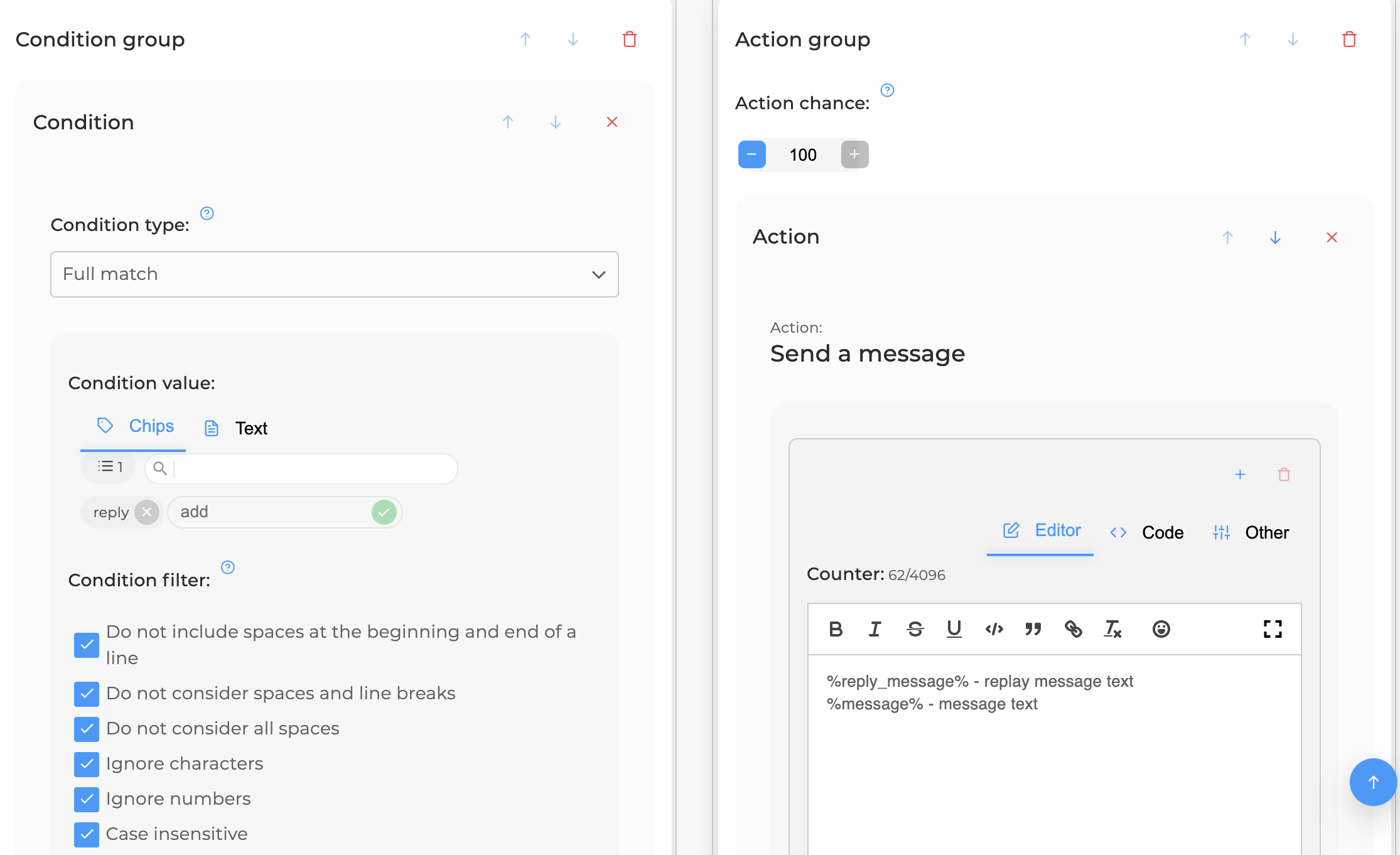 The two placeholders below trigger messages sent by replay.

For commands with forms, you must:

# %form_open_count% - the number of transitions to the form

Captcha fits only the welcome message.

When the "Check for new users" toggle switch is turned on, and a mathematical captcha is used as a check, specify one or both placeholders in the welcome message:

# Ban and warning information is used in moderation filters

# %warning_count% - number of warnings for the period

Written when getting banned

# %banreason% - the reason for the ban

# Placeholders used in any input fields

Such placeholders are used more often for entertainment purposes. The random number generator can be used for contests.

# %rand% - generates a random number up to a million

User prefixes and possible values are used together.

To match prefixes and possible values, simply combine the commands.

The initiator is the user who invoked the trigger. By asking this placeholder, you can find out information about yourself by reputation, rating, experience, number of days in the chat, the number of messages written, rank in the chat.

An analogue of such a placeholder:

# %caller - user who invoked the trigger

Target is the user in response to which the trigger was called. For example, to find out about a specific user in a chat, you need to send a response to the word specified in the trigger conditions.

An analogue of such a placeholder:

# %reply_ - the user to whom the replay was made

# %overtake_ - the user who was overtaken by the amount of reputation

The reaction to such a placeholder will be the username of the user who has just been overtaken in terms of reputation.

This placeholder is used only when issuing reputation, so it is better to enter it in the reputation field.

The random user command works as follows: the number of desired users must correspond to separate lines, as in the picture:

In one call, each team is assigned a number. That is, if the bot chose Olesya at number 1, then the information about the reputation will also be at number 1.

In each call to the command, the bot will assign different numbers to different users

An illustrative example in the picture:

# %msg_prev_day_ - number of messages for the previous day

# %msg_prev_days_ - number of messages for the previous days

The number of messages by day is written in such a way that at the end there is a variable, that is, for what day, if 0 is for today, 1 is for yesterday, etc.

# Possible values for prefixes by user

Combine user prefixes and possible values for specific and random users. With this, you will find out username, login, link, userid, rating, _ reputation_ and _ points_.

For example, you need to find out all the information about a specific user.

Let's consider anchors as an example.

Let's write a trigger that the bot will react to. Let's set the reaction by combining the required prefixes: 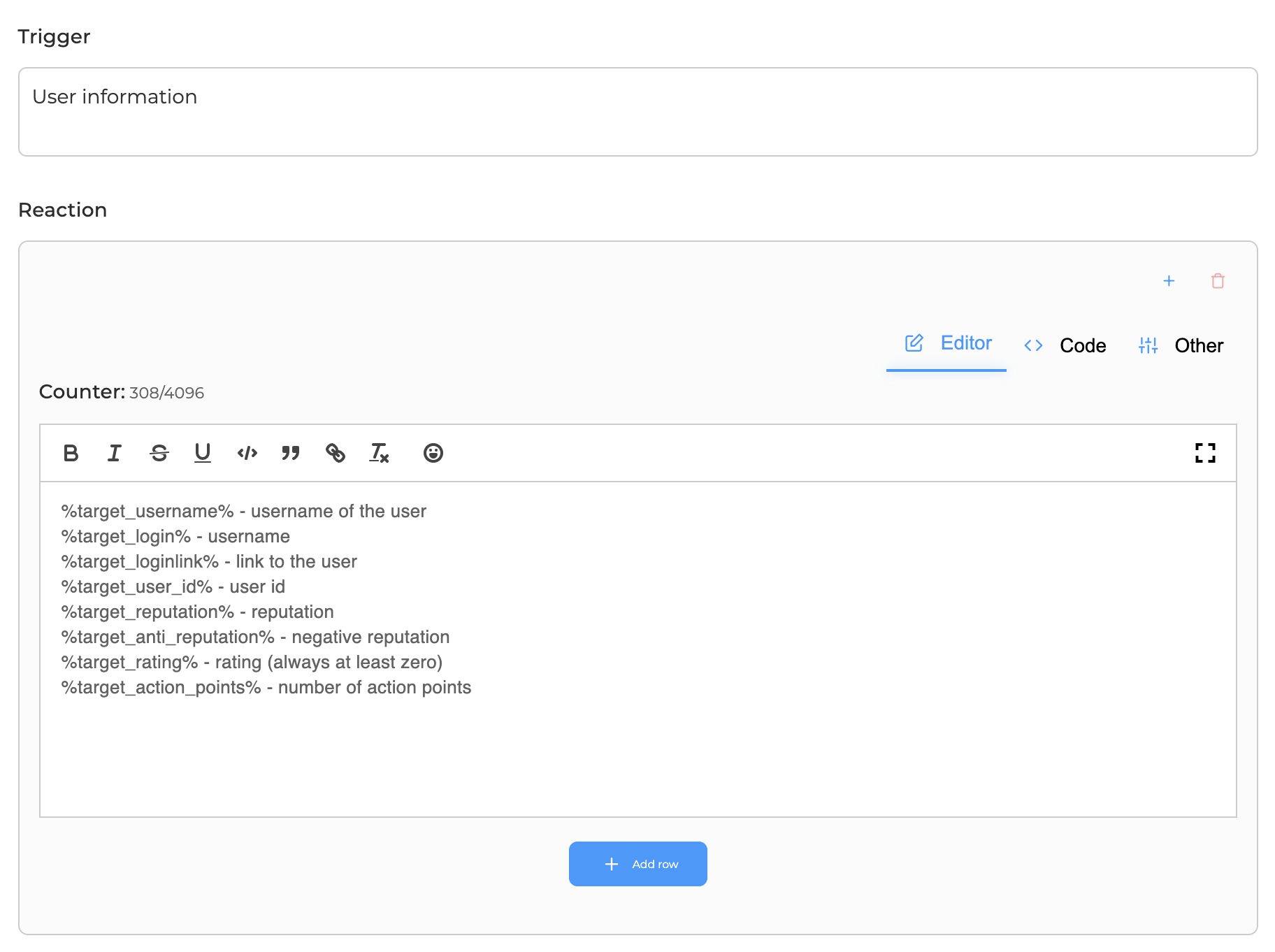 In the chat, in response to the desired participant, we write the set trigger:

# username% - username of the user

# Information about reputation and rating

The value of a positive reputation.

If the reputation is positive, then the value will be 0.

The rating calculates the average of the positive and negative reputation.

# days_in_chat% - number of days in the chat

The value from the first day of participation in the chat.

# days_from_first_message% - number of days since the first message

The value from the first chat message you write.

The value of the rank in a particular chat by a number.

The rank value in a particular chat word.

For example: if the rank is number 3, then the words will be "beginner".

# days_with_message% - how many days of continuous messages

The value shows how many consecutive days messages from a particular user have been received continuously.

The number of messages for all the time in the chat from a specific user.

# xp_next_rank% - the number of points left until the next rank.

The amount of experience earned at this particular moment.